In their effort to increase profit while reducing the strain on the environment, oil and gas companies are constantly looking for innovative ways to extract shale from the Earth. Depending on who you ask, the newest advancements for obtaining that shale differ greatly. Chesapeake Energy, for example, is practicing something called, “monster fracking” which could potentially boost well output 70 percent.

In Colorado, though, they’re hedging their bets on a new advancement in lateral fracking that may help reduce the number of standing wells while increasing the output of each location. The process has already been adopted by several companies like Denver-based SM Energy Company, Pioneer Natural Resources, and, funnily enough, Chesapeake Energy.

What is Lateral Fracking?

In traditional fracking, a well is drilled vertically, deep into the Earth in order to extract gas-rich shale buried in the planet’s crust. In recent years, however, fracking has advanced to a point where drillers are able to drill vertically until they reach the shale. At that point, companies drill horizontally along the shale vein. 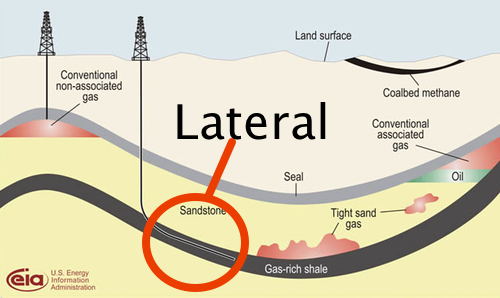 Companies have begun to rely more and more heavily on lateral fracking, even revisiting projects in order to cover more area with fresh lateral drills. SM Energy’s VP of Operations Herbert Vogel told reporters that doubling a project’s laterals from 5,000 feet to 10,000 feet was not only accomplished by a few extra drilling days, it could also improve a site’s profitability by 400 percent. In other words, drilling laterally is not only easy, it’s profitable, especially in places like the shale-rich Permian Basin.

So What’s the Big Deal?

The practical impact of increased lateral drilling will result in the need for fewer above-ground sites, which should help ease the concerns of those people worried about the environmental impact of fracking. Perhaps more pertinent to those who look to hydraulic fracturing as a livelihood, the advances in lateral fracking should help ease the financial burden on companies being hit by the economic downturn.

For those companies hoping to increase their revenue flow — or get a jumpstart on what experts predict will be a busy 2017 for the oil and gas industry — this new update to lateral fracking may be the perfect cost-effective way to get a new project up and running.