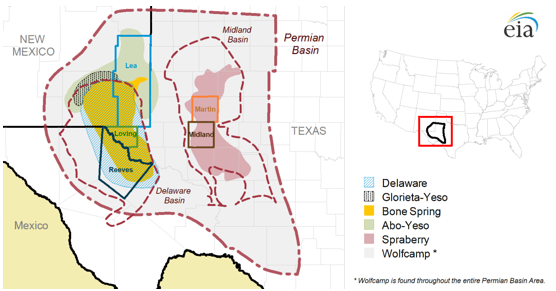 The Permian Basin As it Is

Situated primarily in northwest Texas, the Permian Basin sprawls across the flatlands of the Lonestar State and spills over into the southeast border of New Mexico covering approximately 75,000 square miles. Currently, the Permian Basin is responsible for producing 3.2 million barrels of oil each and every day (and that number is climbing … a lot).

In 2020, the Permian Basin will celebrate 100 years of drilling in the region, a contribution to the American economy that has not only proved somewhat recession proof, the supplies it provided American vehicles in World War II helped turned the tide for the Allies. Even before the announcement in early December, American oil production began and ended in the Permian.

The Wolfcamp and Bone Spring Resource

On Thursday, December 6, the US Department of the Interior announced a mistake in their previous survey of two formations in the Permian’s Delaware Basin. As it happens, prior estimates were off by half. The estimates bump the reserves in the Delaware Basin up to 46.3 billion barrels of oil, 281 trillion cubic feet of natural gas, and 20 billion barrels of natural gas liquids.

A Bright Future for American Energy

This latest exciting discovery — what some energy experts refer to as an “early Christmas presents — all but secures energy dominance for the United States moving forward. The nation’s transition to a net exporter of petroleum products for the first time in 75 years is only the beginning for the US’ oil and gas potential.

However the country proceeds, the Permian Basin will undoubtedly continue to play a critical role.